Retirement spending is hard to predict. You don’t know how long it will last, how long you’ll live, what the economy will do, or how your health might affect your spending. Those challenges (among others) can make retirement planning overwhelming, but you still need to make some assumptions as you move toward retirement.

In the face of so much uncertainty, it’s natural to be conservative—and that’s very reasonable. That said, common retirement planning practices sometimes end up being too conservative in hindsight. The result is less enjoyment, such as needing to work longer, making fewer memories with loved ones, and generally having less fun.

Finding the right balance is tricky, but you can make educated guesses if you learn more about what others have experienced, which we’ll cover here. Hopefully, some of these findings will give you helpful information to make important decisions.

A common approach to retirement spending is to assume that your spending increases by the same amount every year. That’s the rationale behind many retirement planning calculators, as well as the so-called “4% Rule” (which is more of a historical research finding than a rule).

For instance, if inflation is 2.5% per year, you simply add 2.5% to your annual spending. Using round numbers for a simplified example:

Those increases continue indefinitely until the end of your life, allowing you to maintain purchasing power.

However, it takes substantial resources to fund a spending level that continually marches upward. And that might not reflect reality. When using alternative models—which are based on research and actual retiree spending patterns—the odds of success often increase for clients. In some cases, there’s no improvement, and there are no guarantees in life, but it’s worth examining the information available.

So, let’s look at some of that real-world data.

Continue reading below, or watch this video with similar information:

When researchers look at how people spend money during retirement, several patterns emerge.

The one that sounds the most fun is the Retirement Spending Smile from David Blanchett. This finding gets its name from the smile-shaped chart that might illustrate retiree spending over time.

As a brief overview, retirees often increase their spending at a rate that’s slightly less than actual inflation—about 1% less, according to Blanchett. That’s different from the traditional assumption that spending will always move in lockstep with inflation. So, “real” (or inflation-adjusted) spending on a chart starts by going down. That’s the left side of a typical chart.

But healthcare costs increase as you age, and eventually, those higher costs can outpace the less-than-inflation spending increases. As a result, the far right side of a spending chart will increase, creating a smile-shaped line.

Indeed, when modeling financial plans for clients, it’s common to assume that healthcare has a higher inflation rate than overall spending.

Another retirement spending pattern, often associated with Michael Stein, is the theory of Go-Go, Slow-Go, and No-Go spending:

The models above are well-reasoned and based on research, but we all understand that individual circumstances drive your spending. For example, healthcare can be “lumpy,” creating substantial costs at irregular times. Because of that, anything is possible when it comes to spending needs, and the neatly defined patterns above might not hold true.

How Much Will You Spend?

One of the first things to figure out as you plan for retirement is how much you’ll spend each year. There are several ways to do that, and this article describes three strategies for estimating your spending needs. As a quick summary, you can use:

No matter what method you use, it’s crucial to estimate how your spending might change over time. For example, if you’ll pay off the mortgage several years into retirement, your needs will decrease. Likewise, you might initially plan for significant vacation spending, and those costs could decline over time. The same is true if you’re supporting children or paying substantial healthcare costs out of pocket before you’re eligible for Medicare. Finally, check for one-off expenses that might not show up in your budget. For instance, you might get a new car periodically or pay annual property taxes.

How much do most people spend in retirement? It’s all over the board. But the Bureau of Labor Statistics (BLS) shares some helpful information about retirement spending by age.

The Consumer Expenditure Survey provides average data, but it might not be comparable to your situation. Still, it could be interesting to know what others experience. Annual spending by age, using the latest data available:

Interestingly, the numbers above seem to reflect the Go-Go, Slow-Go, and No-Go spending patterns. However, there’s no indication of wealth levels, income sources, or other aspects that might be important.

What Do People Spend Money On?

Spending habits tend to change over time. Things like travel, transportation, and entertainment typically decline as you age, but you might spend substantially on those categories shortly after retirement. Then, health care and charitable giving seem to make up a bigger portion of outlays.

The image below shows spending data from relatively well-off households, which might not be representative of the general population. 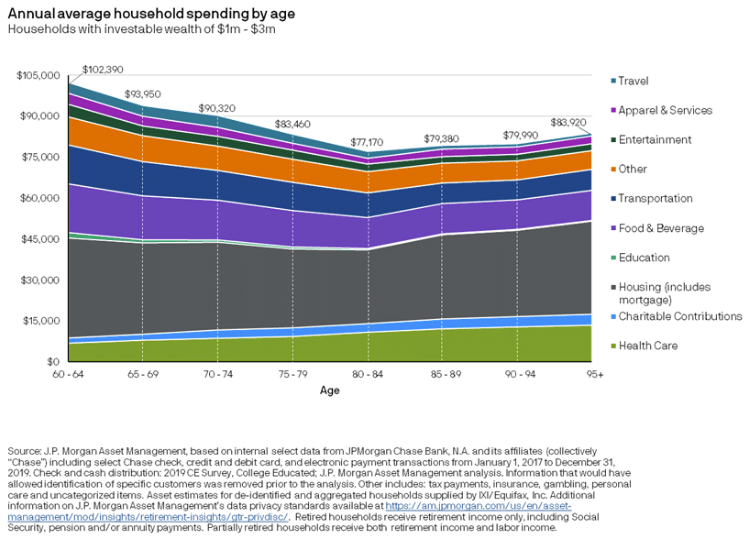 So, how do you actually fund your spending needs in retirement? You might have income sources like a pension or Social Security, as well as assets saved in various accounts. Which accounts should you spend from—or does it matter?

Your income sources provide a base to support some of your spending. But many people need more than that (unless you’re especially fortunate), which means drawing from your retirement savings.

Those details are beyond the scope of this article, but you can read more about tapping retirement savings to create income in retirement. And it’s crucial to understand how your assets (and the decisions you make) affect the amount you have available after taxes for spending.

Decide when to start spending retirement savings, and choose your sources strategically. It could make sense to pull from pre-tax accounts and generate a tax liability—even when you don’t need to—if you’re in a relatively low income tax bracket. That way, you might smooth out your tax burden and avoid complications later, including:

It might be wise to keep some cash on hand to support your spending for several years. If your investments lose value and remain at depressed levels, that cash could help you avoid selling at a loss—which might provide some peace of mind during retirement. Your cash, or similar low-risk investments, might be in a variety of accounts besides a standard taxable bank account.

Your income supports your spending, so the more you have, the better. Consider strategies to maximize Social Security benefits (for yourself and a surviving spouse, if applicable). Pension decisions are also critical, so think about the long term as you evaluate your options. It’s also helpful to keep as much as you can after taxes. This video outlines the typical taxes you pay in retirement as you use your assets for spending.

Consider strategies to manage your income and spending. For example, the Guyton-Klinger approach is a dynamic model that helps you decide how much you can spend based on market performance. When things are going well, you withdraw (and can spend) more. When things go badly, you cut spending.

Other strategies exist, and they all have pros and cons. Some products can even be useful. For instance, I don’t sell annuities, but an immediate income annuity could provide a “license to spend” if you feel confident that you’ll continue to get enough income to meet your needs. That said, you need to be careful with annuities.

Whatever strategy you employ, be sure to account for inflation. Your spending is likely to increase during retirement—perhaps by a substantial amount. If you don’t include that in your spending calculations, you may come up short. Fortunately, Social Security is a powerful tool for dealing with inflation (because benefits are adjusted for inflation), and many retirees get a meaningful amount of income from Social Security.